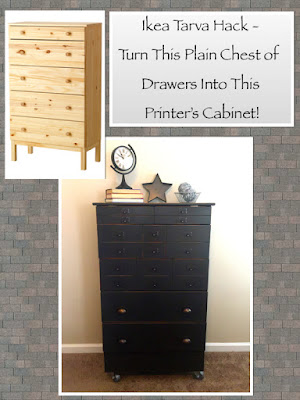 I'm on a mission - a master bedroom makeover mission.  My husband built us this amazing new bed (see the details here) and now NONE of our super traditional honey brown furniture goes with the new rustic industrial (or as I like to call it, farmhouse warehouse) theme. 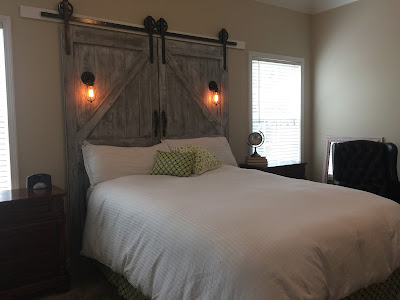 I could go out and buy a new bedroom set but I'm not going to.  The look I want from Restoration Hardware would probably cost me upwards of $5000 for nightstands, a dresser and mirror, and a dresser for my husband.  Instead, I'm going to make our new room look awesome on a shoestring!

Take this modest little chest of drawers.  It's from Ikea, it's called the Tarva chest, and it's $99.  It's pretty tall and it's not veneered wood, it's wood.  The modern lines do not fit in with my rustic industrial vision, but the bones are perfect for a faux apothecary chest or printer's cabinet! 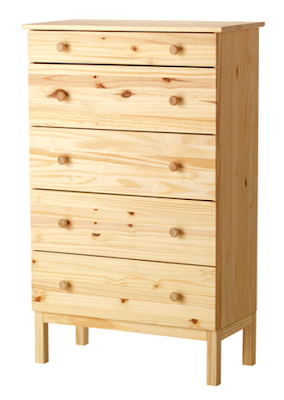 Then one day I came across this amazing transformation on Pinterest and fell in love.  It's posted on the StorywoodDesigns web site and it's a simply gorgeous furniture redo.  I especially loved how each section of the piece had drawers of different sizes.  Please visit her site to see the before and after photos.  Even the before was pretty awesome because of how crazy fabulous the piece was to begin with! 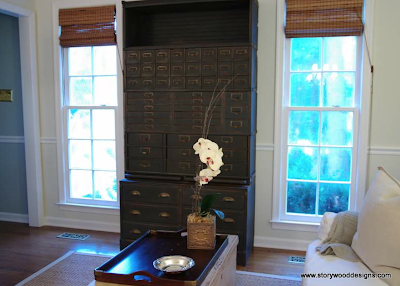 This is obviously much larger than my Tarva dresser but the lines are similar and the color is perfect too.  My headboard is light gray and this is going to be Hubby's dresser, so the dark color and the masculine feel of this is just right for my project.

The first thing I did was remove all the knobs and grab my painter's tape to start making lines on the drawers where I wanted to subdivide them into smaller faux drawers.  I'm not going to actually make a bazillion small drawers, I'm just going to use the router to make grooves in the drawer fronts to simulate them.  I then found some drawer pulls on eBay, printed out a ton of pictures of them, and taped them to the dresser to visualize how it would look. 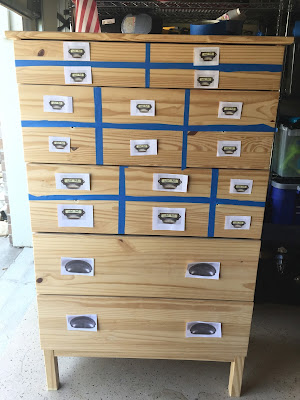 I'm digging it!  Although I think I'll rearrange the drawer configuration a bit.  Hmm, I wonder how casters would look on the bottom? 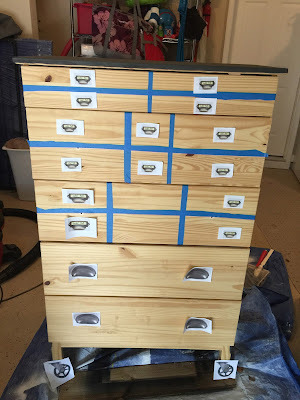 Ooh, me likey!  Now I just need Hubby to use his router to make grooves on the front of the drawers since I've never used his router before and have no idea what I'm doing.  (I'm leaving the bottom two drawers alone.)

I grabbed a square (basically a T shaped yardstick) and marked my lines so he knew where to cut, and he used his router to make thin grooves, like this.  They're not very deep, maybe 1/4" tops.


When that's done, it's time to paint.  I wanted to use chalk paint so that I wouldn't have to prime or sand, but ain't no way I'm paying $30 a quart for brand name chalk paint.  I mean, come on.  Does anyone besides me think that's insane?!  So I made my own.

I bought a sample size of a lovely warm dark gray Sherwin Williams brand paint at Lowe's.  It's less than $4 and it's about a quart of paint, which will be more than enough for this project.   An ACTUAL quart of this paint is $16, yet the sample is almost the same quantity and only costs $4 or so.  I feel kind of bad when the guy at Lowe's mixes me up a sample thinking I'm going to come back and get a quart later.  (Ha ha ha, no I don't!)  I then mix in a separate container:


I admit, I did a craptastic job of mixing the plaster of paris into the paint because when I rolled it on with my little sponge roller, I had chunks of white powder in my paint finish.  Then when I sanded lightly to get rid of the chunks after it dried, the chunk turned into chalk which then streaked across my paint finish, just like chalk on a chalkboard.  So I had to sand A LOT and keep remixing my paint.  Next time I'll mix the water and plaster of paris together first and then add the paint.

Then I needed to sand around all the edges for the worn, distressed look.  Hubby has a bazillion sanders but this little Dremmel one was triangular and perfect for getting into the grooves around the drawers. 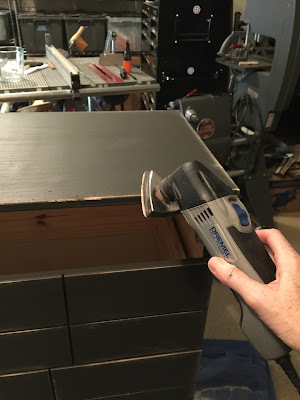 I had seen a sample board at a local hardware store with ideas for paint combinations.  These are General Finishes brand milk paint and glaze. 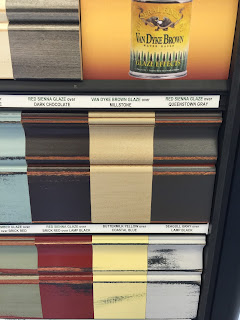 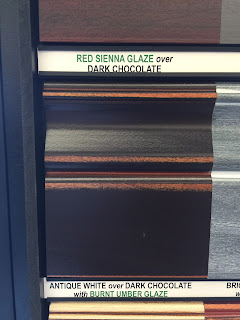 Hubby was digging the dark chocolate with a coppery looking glaze.  So when I picked up my dark gray paint I also got another sample mixed of a coppery orange paint.  It's not metallic, just really coppery in color.  After the gray paint was dry, I distressed around the edges, sanded lightly to make it all smooth, and wiped with a damp rag to remove any dust.  Now it was time for the glaze.  I usually dip a rag in the glaze mixture, wipe it along the distressed edges where the wood is bare, and wipe it back off almost immediately.  But this paint dried very light and I needed multiple coats.

Here's how I make the glaze:  I mix my clear glaze with just a splash of paint.  It's very imprecise but it's probably a ratio of 6:1 or more.  So maybe 1/2 cup of clear glaze and a spoonful of paint.  I find that if I use too much paint it's hard to wipe back off and I didn't want an orange sheen over the gray.  Alternatively, I could have painted the edges orange first, then painted the whole thing gray, and then sanded the gray off and let the orange show through.

Here's a sequence of photos to show you my glazing process.  I'm sure there are a ton of other ways to do this, but this is how I do it and it works for me. 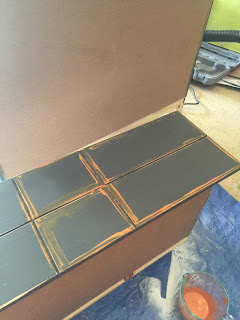 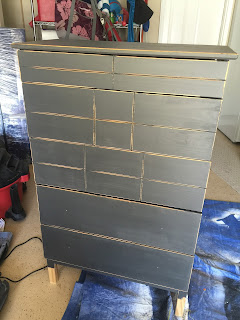 Once that's all dry, I used a clear wax to seal it.  You don't need a fancy chalk paint wax that's $900 a pint.  Minwax paste wax for furniture is just fine, comes in a huge can, and it's cheap.  Just put some on a rag, wipe it all on, wait 15 minutes, then buff it off with a clean rag.


Hmm, it's looking too…… flat and one dimensional to me.  I think I'll go over it all with a dark wax.  I made my own by scooping out some of the clear wax into a bowl, melted it a bit, and stirred in a spoonful of the darkest oil based stain that I had (Varathane Dark Walnut). 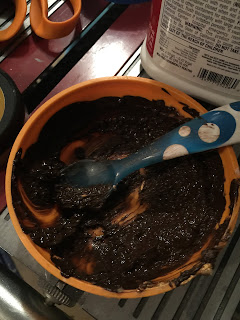 Then I went over the whole thing, waited 15, and buffed it again.  Still too boring.

So then I applied dark wax just to the center of each drawer, thinking that's where the drawer would get dirty from your hand always reaching for the drawer pulls.  I applied it, let it sit overnight, and buffed the next morning.  BAD MOVE!  It would NOT buff out and now I had very obvious brown stripes on the drawers.  So I had to add more clear wax to move the dark wax around, wait 15, then buff.  Damn, my arms are tired. 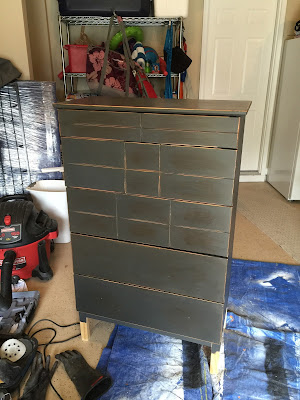 It's still missing something.  I know!  I have some gold metallic wax that I'm going to use to redo a bedroom mirror that's currently pink and white.  So let's mix a bit of gold into the dark wax and see what that does. 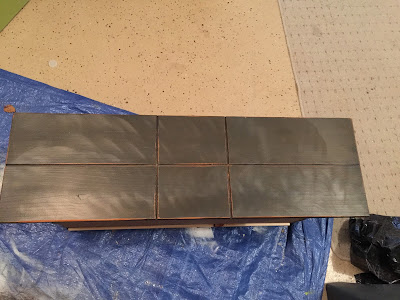 There we go, that's what I'm talking about!  It almost looks like brushed metal now, doesn't it?  This is with the wax applied and waiting to be buffed off.   It won't be so shiny when I buff it but now it has that bit of sheen that gives it some depth and character.  I buffed it with my husband's super wazoo electric buffing machine that he uses to wax his car.  It removed all the circular marks and left a subtle sheen without being oily or shiny.  Kind of the equivalent of a satin paint finish.

When using wax, you MUST let it cure two days before you put anything on it.  So don't move it into your bedroom and decorate it just yet or you'll get permanent marks in the surface.  The only way to remove them is to sand it all off and start over.  Don't do it!  If you live in the hot and humid south like I do, you may have to bring your piece in the house and let it cure in the air conditioning.  That baby just was not drying out in my garage.

Last, but not least, we wanted some casters on the bottom but those skinny little Ikea legs weren't wide enough.  So Hubby created a kind of apron to go around the opening at the bottom of the dresser using 1x8" boards.  He just cut them to length, fit them between the legs, and screwed them in from the back side.  He also had to add a piece for the casters to screw into.  The base of those 3" casters was too wide for the existing legs and needed something to screw into. 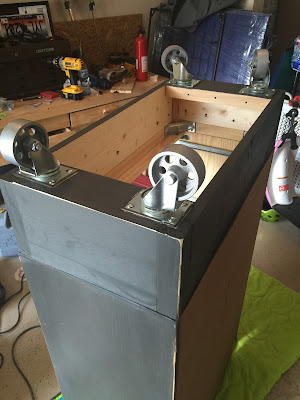 Here's what she looks like in her new home.  I love it!  Now I just need a great industrial lamp and I'll be all set. 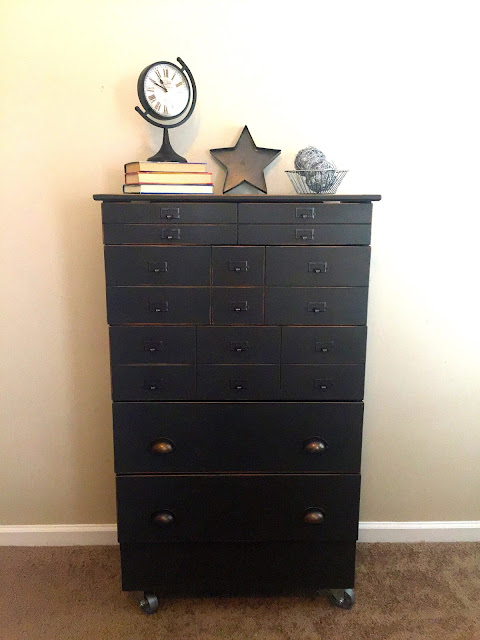 I think this would look great in an office or media room too.  What do you think?